In Ķemeri National Park, the restoration of meadow habitats in the area of 5 hectares is currently being tested

Home » News » In Ķemeri National Park, the restoration of meadow habitats in the area of 5 hectares is currently being tested

A method of restoring meadow habitats was tested by sowing meadow plant seeds collected in other natural grasslands. This was done to increase species diversity and promote faster regeneration of natural grasslands in the Dunduri meadows of Ķemeri National Park, for the first time in a large continuous area. In an area of five hectares, the Nature Conservation Agency (hereinafter - the Agency) together with the partners of the LIFE Integrated Project LatViaNature sowed more than 14 kilograms of seeds collected this summer in Latvia's natural grasslands and similar habitats.

The seeding tradition in Ķemeri NP started in 2008 with small experimental plots and extended to several hectares in 2020 (the Dundurpļavas pasture). The Dundurpļavas grassland massif is a typical example of grasslands which were heavily drained and converted into intensively cultivated agricultural lands during the Soviet period. Though the hydrology of the area has been restored, and the grasslands are used for hay collecting and grazing, the recovery of semi-natural plant species composition is very slow. The main reason is the lack of a donor area in the surrounding landscape.

Agnese Priede, the Team Leader of Habitats and Species Experts of the LIFE-IP LatViaNature project, explains that this method has already been tested in several European countries and elsewhere in the world.

“In Latvia, the method is still new, not yet used at a broader scale. In fact, it is the re-creation of protected habitats. The seeds are sown on, what can be understood as meadow species diversity islands, from where they spread further. It is important to note that the vast majority of wild plant seeds do not germinate in the first year, but may appear and become recognisable only after several years. Therefore, we will be able to analyse the first results in about two or three years,” explains A.Priede.

The seed mixture used contains more than 50 native grassland plant species characteristic for semi-natural grasslands. Some of them are considered indicators of semi-natural grasslands (= protected grassland habitats), for instance: Agrimonia eupatoria, Carex flacca, Galium boreale, Primula veris and Trollius europaeus. The seeds were collected in the summer of 2021, mostly in the meadows of Ķemeri National Park and Abava Valley (W Latvia). The material is hand-picked, dried at room temperature and then chopped and sorted to ensure there is no undesirable admixture of neither invasive nor aggressive (expansive) native plant species.

The meadow habitat restoration work took place within the initiative “Let’s do it for nature!”, which is implemented by the Nature Conservation Agency together with Pasaules Dabas Fonds. The initiative annually involve more than 1000 volunteers annually in various nature conservation activities throughout Latvia. They work together to restore river streams, clear meadows from bushes, collect reeds and eradicate invasive species. More: www.darudabai.lv

Linda Uzule about summer expeditions, science and the internet of nature

New nature conservation models to be created for private forests 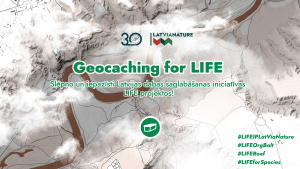 Five projects have been approved to restrict invasive species

The Project “Optimising the Governance and Management of the Natura 2000 Protected Areas Network in Latvia” (LIFE19 IPE/LV/000010 LIFE-IP LatViaNature) is implemented with the financial support of the LIFE Programme of the European Union and Latvian State Regional Development Agency.

The information reflects only the LIFE-IP LatViaNature project beneficiaries’ view and the European Climate, Infrastructure and Environment Executive Agency is not responsible for any use that may be made of the information contained therein.